I have been working to incorporate a laser cutter into printmaking at the Experimental Printmaking Institute, and in doing so I hope to produce a poster version of my Paradise Made comic book cover. This is an ongoing process, but some of the progress is shown below, in roughly chronological order.

The whole process started with learning how to use the laser cutter. I very quickly realized I was not getting the quality I expected, so I taught myself how to refocus the laser, and generally gave the whole thing a tune up. After doing that I could begin to work with actual images. The end goal here is to be able to etch plexiglass plates to then ink and print. That being said I did not want to waste much plexi dialing in the settings, so I used paper at first.

This is the final test before I moved on to plexi. 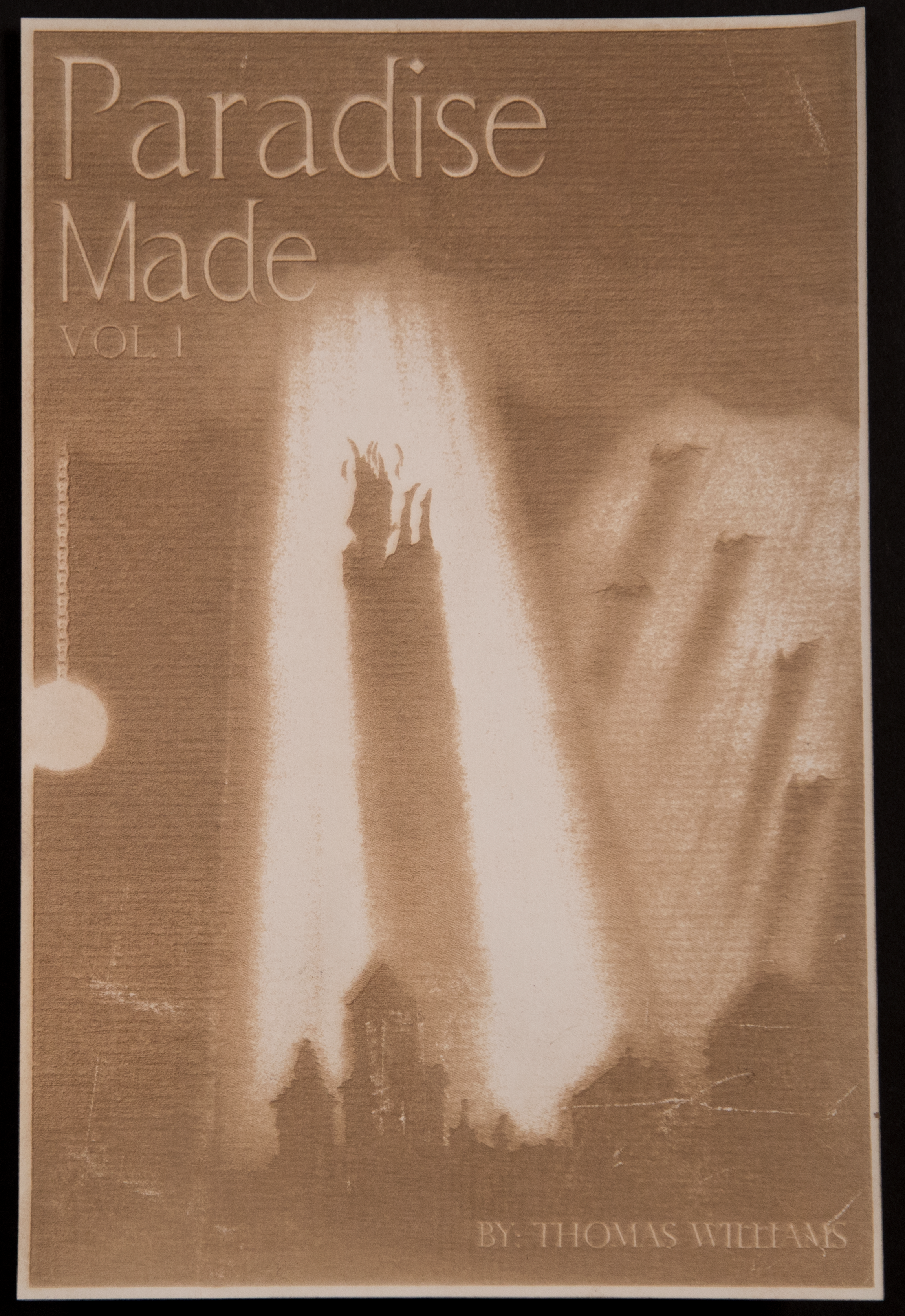 So once I was comfortable with the laser I began testing on small amounts of plexi. This meant figuring out how I was going to achieve shading once I inked a plate. When giving the laser an image there are many different options of dithering. I made a true gradient in a graphics editor and then applied each of the lasers dithering patterns to it, etched it into a plate, inked it, and printed it. 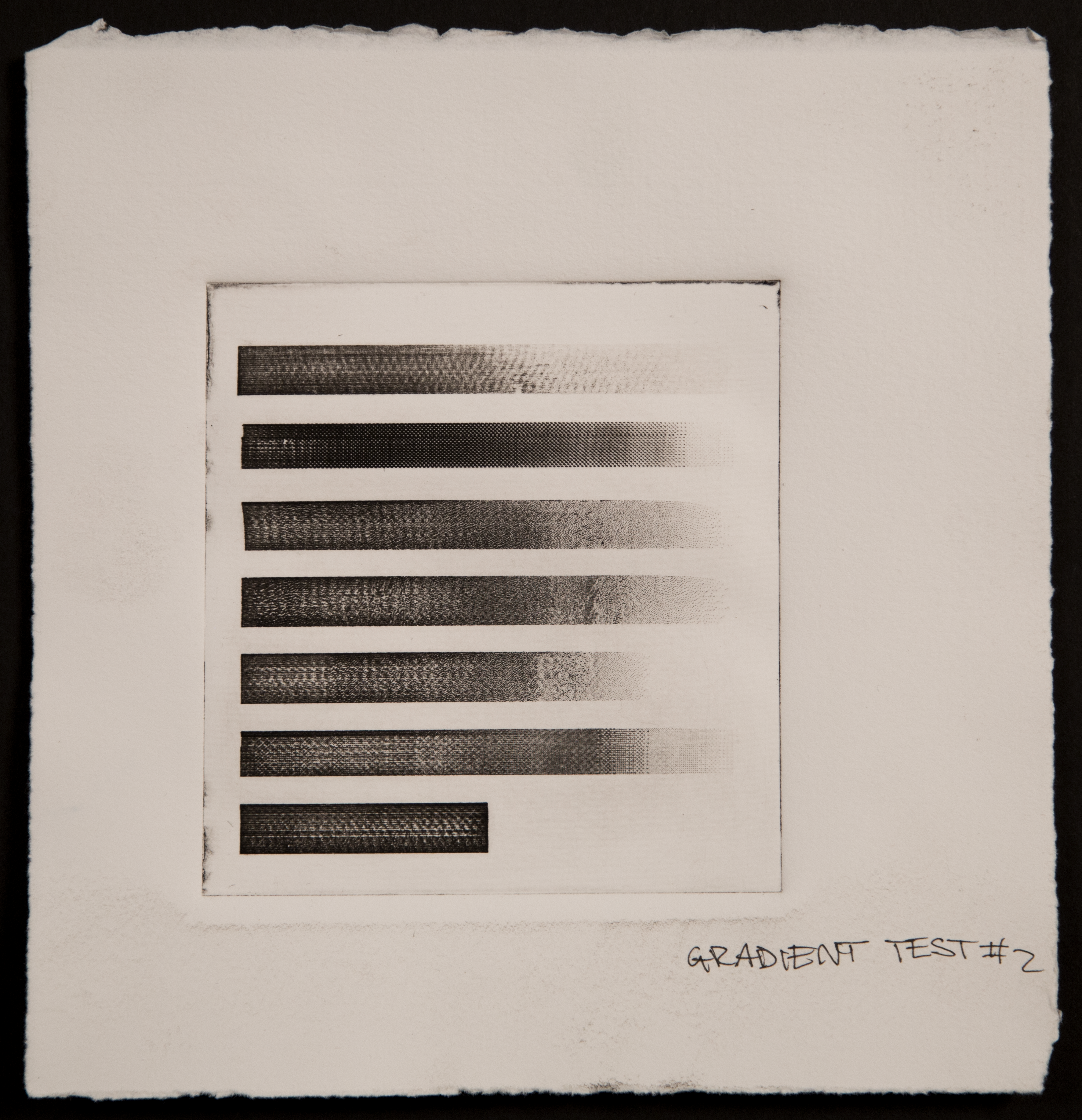 This is the second test because I also experimented with sanding at this point. A light amount of sanding ended up being the best and the results of that are the image above. I also wasn't totally happy with any of these shading patterns for my purposes, so I went with another method. The last row of the test above is called 'threshold' and activates the laser when a given pixel is a certain shade of grey and above. With this I could define my shading in my graphics editor and then cut my image with threshold and any pixel I want to end up with ink will be cut.

After doing the above testing I used a halftone pattern to define shading from the original image, and then cut a small portion of the full image to ink and test. I actually plan on using white ink for this, so the area of the plate I etched with the laser is where the original image has white space.

So after all this testing I was ready to cut a full plate. It's not perfect, but it is very usable and serves as a good example of what this process is capable of. The colors of these proofs are inverted from the final piece because I only had a small amount of black paper that would hold up to the white ink, as that ink is very sticky. At the moment the cut is a little too deep, and really holds on to a lot of ink. This in combination with how sticky the white ink is poses a real threat to any type of paper I might use. So the plate will need to be recut, but I am very happy with how these proofs looks. 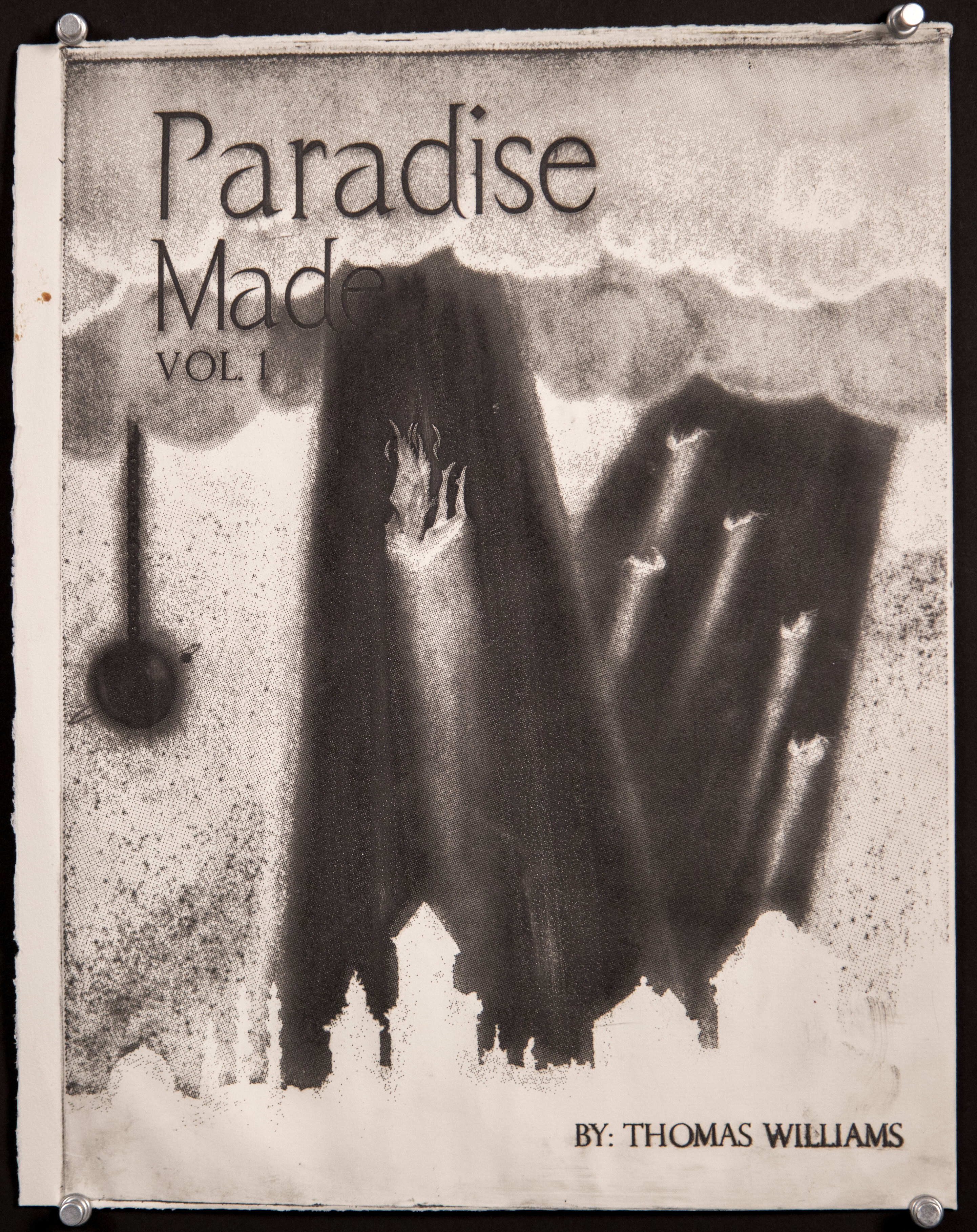 With a usable plate the next step I needed to tackle was getting black paper. Thus far I had been largely using scraps from the studio for my testing and I wanted to try and keep that going. The studio I have been working in keeps a lot of scrap paper, and recently got a paper pulper. Before getting the pulper working I did some small scale testing making my own paper using a blender and screens.

The 3 large grey pieces were made by mixing Sumi ink into the paper pulp slurry and then forming sheets of varying thickness. The color of these was not dark enough, so I did some small scale tests. The 4 small pieces on the right from top to bottom are: Dry white paper soaked in Sumi ink, pre-soaked white paper in Sumi ink, the grey paper pre-soaked in water them ink, and a dry piece of grey paper soaked in Sumi ink. Of these the best one is the grey paper, pre-soaked and them soaked in ink. The paper pulper is now up and running, so some larger scale tests can be done. The paper pulper is a kit that I helped source a motor for and then wired that motor and mounted it to the rest of the machine. More documentation of this can be found toward the top of the page. 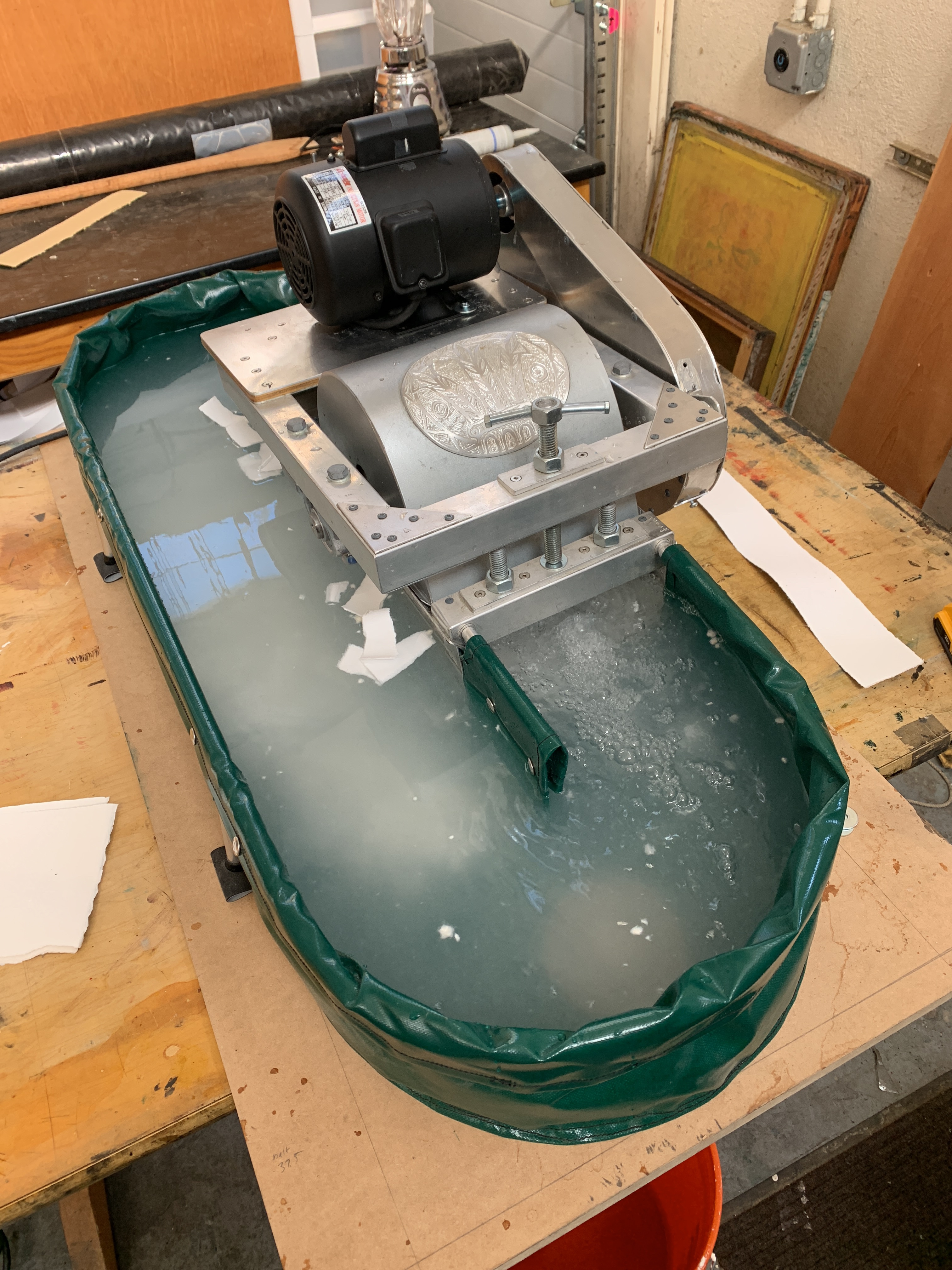 This pretty much concludes where this project is at the moment. Testing and experimenting with paper is currently underway, but once something usable is produced I can begin testing the plate on that paper with white ink. In the meantime I will recut the plate to be a bit less deep, which should improve image quality.